BENZA thunder karate shin instep WKF style, made with the exact specifications of the World Federation of Karate.
The shin manufactured with exact size specifications and designs as required by the WKF, to ensure the safety of all athletes participating during controlled racing in small or elite levels. The BENZA Karate Shin Instep can be used for many styles of semi and full contact sparring disciplines, however, it is mainly utilized for Sport Karate. This piece of sparring protection has been a top selling item to many Karate clubs across the country. The BENZA Thunder Karate shin instep is widely popular amongst all level of athletes looking for protection that will not break the bank & still be reliable. Additionally, this shin guard has the option to remove the instep portion at the user’s leisure or if needing to replace any damaged instep. These shin guards are available in both red and blue colour choices with sizes Xtra small to Large to outfit most athletes. 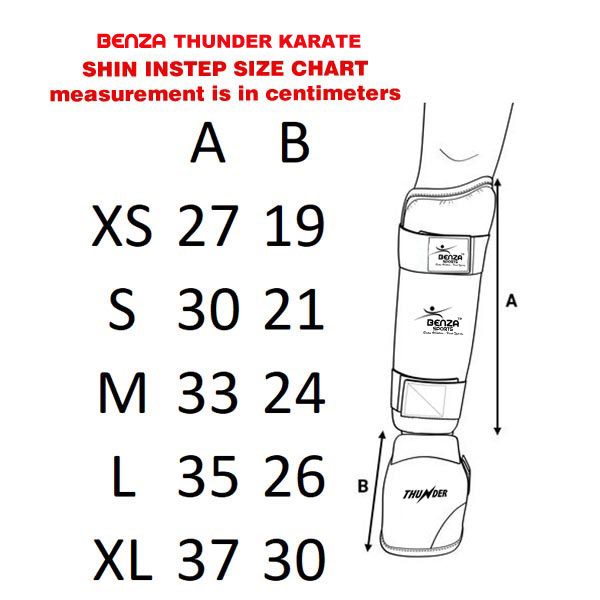 
The World Karate Federation (WKF) is the largest international governing body of sport karate with over 130 member countries.[4] It was formed in 1990 and is the only karate organization recognized by the International Olympic Committee and has more than ten million members. The WKF organizes the Junior and Senior Karate World Championships, which are each held every other year. The President of the WKF is Antonio Espinos, and the headquarters are located in Madrid, Spain.[8] The styles recognised by the WKF are Gōjū-ryū, Shitō-ryū, Shotokan and Wadō-ryū.
To See our full range of shin guards please click the link below: BENZA SHIN GUARDS